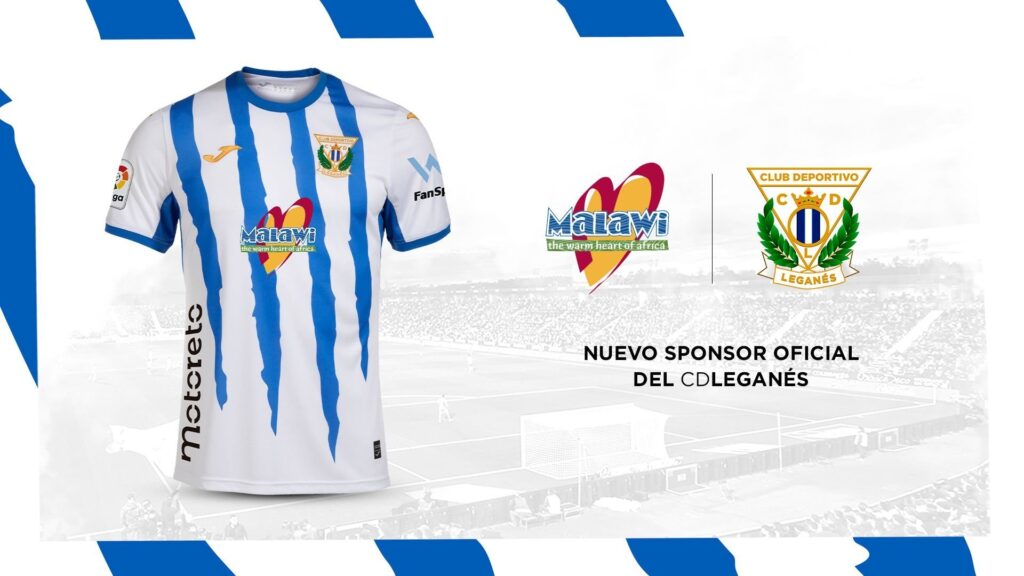 Club Deportivo Leganés — a football team based in Leganés community of Madrid, Spain, that currently competes in the second tier of the Spanish league system, the Segunda División — has signed an agreement with Malawi Ministry of Tourism, Culture & Wildlife, to join the club’s rotating ‘main sponsor’ strategy.

The ‘main sponsor’ strategy allows companies from different sectors to have the opportunity to associate themselves with CD Leganes, to “enjoy the notoriety that comes with being a ‘main sponsor’”.

A statement from Secretary for Tourism, Culture & Wildlife, Chauncy Simwaka says the club will be displaying the logo ‘Malawi, The Warm Heart of Africa’ on the front of the team’s jersey in matches as well as in different media — both physical and digital.

“With this agreement, Malawi seeks to continue with its strategy of expanding brand awareness,” says Simwaka in the statement, further saying the president of the club, Jeff Luhnow met President Lazarus Chakwera in September last year “to begin to strengthen ties and begin the search for opportunities and talent in football”.

The jersey emblazoned with ‘Malawi, The Warm Heart of Africa’ will begin to appear from Sunday, January 22 in the club’s Matchday match against Levante UD at the Estadio Municipal Burtaque. 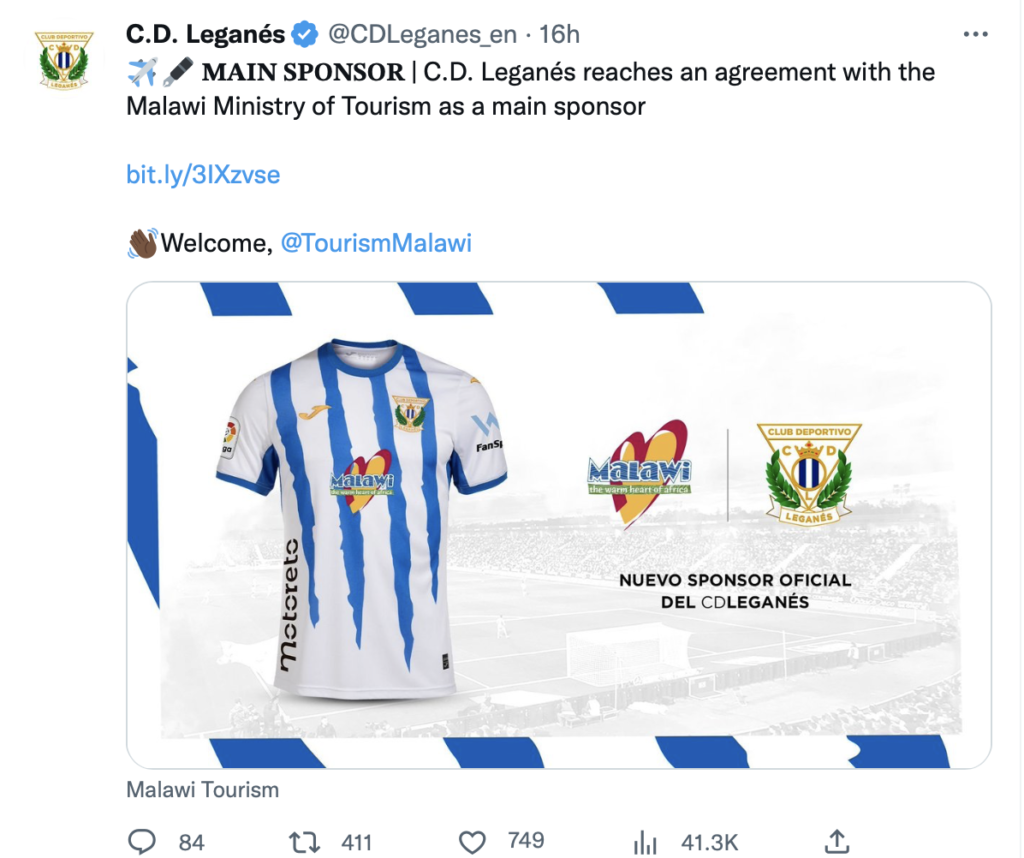 Simwaka emphasizes that the “gracious offer for the brand comes at no cost to the Ministry and that Malawi as a country is proud to be associated with CD Leganes and we believe that this exposure will not only be able to reach Spanish consumers and the team’s fan base but also football fans by depicting Malawi as a tourism destination”.

In 2018, Rwanda reached an agreement with English Premiership side, Arsenal, through which the London club features ‘Visit Rwanda’ logo on the left jersey sleeve as the club’s official tourism partner — signed at a £10 million-per-year contract lasting four years.

Club Deportivo Leganés was founded on June 23, 1928, whose home games held at the Estadio Municipal de Butarque, which seats 12,454 spectators.

On its website, the club says with this agreement, “C.D. Leganés seeks to continue with its international brand expansion strategy” and quotes its Luhnow as attesting that, together with the club’s Africa partner, Rainbow Sports, met with President Chakwera last September to begin to strengthen ties “as part of a broader Malawi and Africa football development project”.

Luhnow is quoted as saying: “In Malawi, as in almost all of Africa, there is great soccer potential, and with this agreement, we go one step further.

“We want to take advantage of this opportunity to be able to reach a large part of the country’s young population and to be able to start developing different Actions.”

After a steady progression, Leganés reached the division 3 in 1987, being promoted to the second division six years later and maintaining its league status for 11 seasons — during which it collected two consecutive eighth places (best) from 1995 to 1997.

In the 2013-14 season, Leganés promoted to Segunda Division after 10 seasons in Segunda B and for the first time in their history, Leganés earned promotion to La Lita in the 2015-16 season — becoming the fifth team from Community of Madrid to ever play in La Liga after Real Madrid, Atletico Madrid, Rayo Vallecano and Getafe.

They remained in the top flight for four seasons, reaching a peak of 13th in 2018-19 before relegation in the last game of the following season, a 2–2 home draw with Real Madrid.

During this spell, the team qualified for the first time to the semifinals of Copa del Rey by eliminating Real Madrid in the quarterfinals thanks to a 2–1 win at Santiago Bernabeu Stadium — Spain’s most glamorous football venue.